Hypocrites and the REAL Jesus

Let’s be honest… what do you REALLY think about Jesus?  Deep down inside where nobody else can see, what portrait do you personally paint of the Prince of Peace?

Here’s what I think…  there are countless rebels cloaked in religion that have created what I like to call their own “Mr. Potato Head” god.  Do you remember Mr. Potato Head?  That’s the childhood game that let you pick, mix, and match all the identifying attributes of the every-changing, never-consistent “core-potato.” 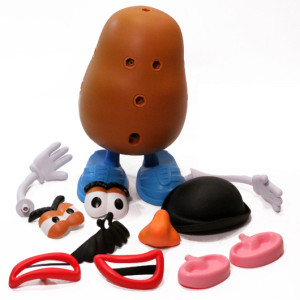 In the context of church (and “professing” Christianity), tragically, the game is played in the following way.

First, there is a perverted acceptance of the Mr. Potato Head principle, namely, that Jesus (as an alleged demonstration of His endless love) is a morph-able Messiah who wants you to approach Him like a Chinese buffet (…help yourself  –  take only the stuff you like  –  and choose your own serving sizes…).   You, so the games says, are in charge.  You decide how you want Jesus to look.  You pick which parts, promises, and prohibitions to “put on Him” today… And don’t worry about the long-term because, again, you’re said to be in charge, and thus, as your whims and wants waver, you can always make Jesus do and say what you want at the next fork in the road…

While neither time nor space allow me to cover all the potential Potato Head portraits of Jesus, let me offer a few of the more prominent & poisonous portrayals so you can hold them up like a mirror for yourself or those to whom you minister.

If you like to champion the one-sided biblical truth that emphasizes the fact that God is love (all the while neglecting that God is also Holy, Just, LORD, etc.), you’re probably in this pool of Potato-ites…  For you friend, I prescribe a trip back to the cross.  For you, this trip to the cross is not intended to reacquaint you with God’s love, there demonstrated for sinners.  No.  This time, as you look at Jesus hanging on the cross, nailed and bloody, see God’s hate for sin and unrepentant sinners.   The cross is God’s greatest demonstration of both love & hate man will ever know.

If the Hippie-Jesus Potato-ites “make you sick” and turn your stomach with an un-empathetic toxin, you’re probably a fan of the “Pharisee Jesus” fallacy.  You, my friend, hang out with all the mean-spirited, hard-hearted Potato-ites.  You tend to think that Jesus called & created you to champion & clarify all His rules, rituals, and religious reasoning.  Your spiritual signature is often found in your exemplary resume AND superficial relationships.  The tragic irony is that in your case, each part of your signature (resume & relationships) proves to disqualify the other…

If you’re greatest concern is not becoming an extremist like the Hippie & Pharisee Potato-ites, coupled with an “everything in moderation” – “middle of the road” mantra, chances are you’re a “frog in the pot” – “Lukewarm Jesus” Potato-ite.  Sorry.  I know you thought you were the one subset of reasonability and level-headedness that should be applauded.  Friend, nothing could be further from the truth.  Jesus was anything but indecisive.  Jesus never laid claim to the “middle of the road.”  Instead, you will find that the Jesus of the Bible was an extremist.  The difference is that He was THE righteous Extremist… and He calls you, me, and every other Christian to follow in His extremist footsteps.   Remember, He promises to puke all lukewarm want-to-be’s out of His mouth.

Repent & believe in One crucified King…  Jesus, THE Christ!